Mythorealism describes a concept of art of painting, that makes use of already existing art movements like realism, symbolism, naturalism or surrealism. It conciliates these forms with myth in its original meaning of being a narrative, which people and cultures use to express their understanding of the world and the way they see themselves, interwoven with the in-depth interpretation of psychological factors. 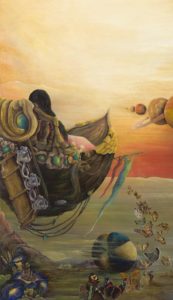 It was Prof. Dr. Dr. Werner Janssen, a German-Dutch philosopher, germanist, political scientist, teacher and founder and director of the International Culture and Science Festival EURIADE, set up by him in 1981, who had coined the term mythorealism during his words of introduction to my exhibition in Aachen. 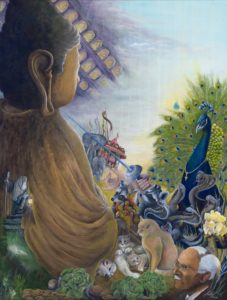 In the opinion of Prof. Dr. Dr. Werner Janssen this defines me a as the founder of the new art style, mythorealism. On Canvas I put side by side picture elements, which at first glance appear contradictory and out of place and therefore defy a rational control.

Symbols from different cultural environments are combined with photorealistically displayed details from nature and figments of imagination. The connection between human beings, nature and creative spirit is shown in a way, that – while looking at it – creates and awakens pictures in the observer’s mind, which are able to tell stories. Imagination functions as bridge, reveals the secrets of the creation that are interwoven with human nature. It’s in the style of mythorealism, this deeply interwoven interaction of myth, realism, psychology and psychoanalysis, that I create my „inner portrait“. This individual work deals with the personality of a human being, interprets his strengths and weaknesses, his opportunities and exceptional talents.

This short article explains the origin of the term „mythorealism“ and shows the impact of different painting styles, psychology and psychoanalysis on the new concept of art of painting.

In its original meaning a myth is a narrative. This narrative, handed down in various anonymous forms and initially transmitted orally, relates to gods, demons, heroes and incidents of prehistoric time and especially to the origin of humans or the world. Such myths can be proven in all cultures. They offer answers to the way cultures and humans see theirselves and to their understanding of the world. In a myth a clear and figurative language, that is easy to understand for most people, prevails. Thereby myths often can be understood as practical guides to obtaining a vision of the world while describing a prehistoric incident, that explain a contemporary fact or at least provide indications to its background.Mostly the myth tells only between the lines wherein lies the allegory for a human being. 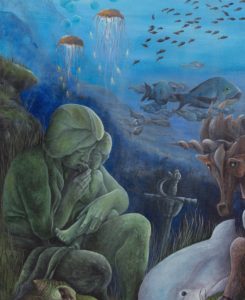 This is what makes it effective and what gives orienting strength to the people. And this is also why they keep on telling it over and over again. Since the 19th century the vision of a repeated confirmation in experiencing and narrating is often bound up to the term myth. The human being sees and experiences basic patterns of existence that he knows or that he can learn from. According to Goethe the ancient mythology is the reflected truth of an ancient present and in myth he finds anthropology in a higher sense. The Eternal Return, described by Nietzsche, is an eternal return, namely of the same.  Thomas Mann defines the nature of the myth as „timeless Always-Presence“. Mann’s conception of myth can in essence be described by the statement, that the typical is the mythical. Behind all apparently individual relations and incidents in the world he sees basic patterns, that are repeated consistently. In art history realism is defined as a new art movement, starting in the middle of the 19th century in Europe. Artists attached value to representing characters and their behavior as accurately as possible. A claim to realistic representations of themes and motifs was raised. 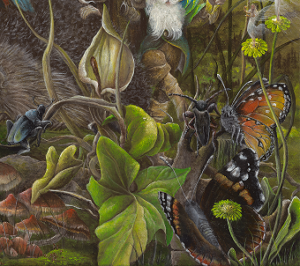 In contrast also the general explanation regarding the meaning of the word „realistic“, according to which this could express the correct, appropriate evaluation of reality as well, is considerable. In the second half of the 19th century this idea was followed by an artistic and literary movement which had aimed to artistically present everything, that had been considered as real and that they had been able to present. The philosophical concept of a world, existing independently of our consciousness, is only one of many ways to consider realism. The existence of subjects beyond the human consciousness is largely undenied.

In 1789 Novalis explained that „we only know something, insofar that we can express or do it“. At this point mythorealism links narratives of the myths with realities of different levels of consciousness. Mythorealism combines a realistic representation of the concrete world with the one of myths and legends, which speaks of the agent in all life. It expresses something we don’t know in real life, because of the fact that we very likely never have experienced it in our current, present form of consciousness. Mythorealism explores a world beyond the one that is presented by the ontological realistic philosophical approach and is therefore able to see more than the usual. In pictorial form it tells of occurrences which give us additional or enlarged knowledge and it shares narratives with us that can be taken as a way of interpreting reality. 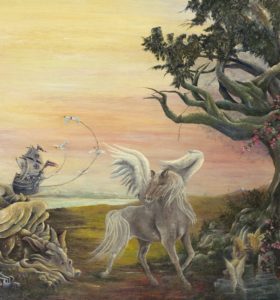 Prior to great minds of philosophy there have always been people believing that there must be someone outside who is responsible for everything. A god, a higher being. That was the reason why in ancient times there were numerous deities, who were associated with what was seen in nature. Goethe has already explained which wonders you see in life if you engage yourself to the agent of nature that you can perceive when you watch it. Just as Faust, who is looking for the most beauty behind everything, finds this wonderful goddess who had created everything. Mythorealism looks behind the facade of the obvious in the course of which it discovers the beauty, that is inherent in all living beings. It is a art form that set itself the task of revealing backgrounds and the unconscious as connected and related with what you see, so that it can point out why the world is the way it is. In this context one can talk of a visionary art form. The first paintings which can be understood as manifestation of visionary art were created in the 15th century by Hieronymus Bosch, a Dutch renaissance painter.

Influences of other painting styles

Mythorealism incorporates segments of different styles and forms them to a overall presentation. Entirely in accordance with its definition mythorealism regards its works as narrative that tells about worlds, things and wonders behind the world and behind the well-known things, which are not so readily comprehensible and not accessible to the ratio. In its opinion there exists a reality that is independent of human beings but still perceptible to them. By using symbols and metaphors this rationally inexplicable and what you think or what you believe in, is represented in order to transmit certain messages to the observer or to indicate coherences within one painting. Humans need symbols to get access to the otherwise incomprehensible and to be able to deal with it expediently. 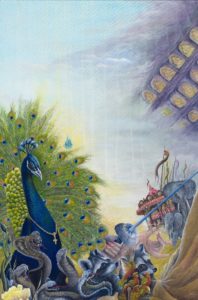 Mythorealism primarily works with elements of symbolism. The best known symbol for love and affection is for example a red rose. On the other hand, signs that had become symbols, disguise in an encoded way the unhidden meaning of what is shown. The not knowing observer won’t be able to understand that encoded message. Snails represent generally slowness and lethargy. In their symbolic significance though snails represent Christ’s resurrection. Surrealism is supposed to express as far as possible the unconscious and the supernatural in an artist’s nature as well as achieve a deeper understanding of reality. The expansion of consciousness towards a „surreal“ perception that goes beyond the simple reality, was its objective. Those approaches are followed by the mythorealism with its perspective behind the things, its regard to the world behind the world, in this case serving as simple reality. Referring to its painting style though and contrary to the surrealism, mythorealism remains in the tradition of naturalism. Seen reality is not falsified or even abstracted. A certain importance is placed on anatomic accuracy and on legibility of the painted object.

Influence of psychology and psychoanalysis

Mythorealism is affected by Sigmund Freud’s findings about the effects of unconscious, psychological processes. Consciousness and subconsciousness work closely together. The subconsciousness follows several principles. Different facts are not considered in a rational way, but it takes its actions because of thoughts, imagination and prior experience. Assuming that the subconsciousness is the sum of all ideas, memories, impressions, attitudes and the willingness to take actions, that we have inside of us, then the subconsciousness inevitably can be defined as the spot, where myths are being stored. 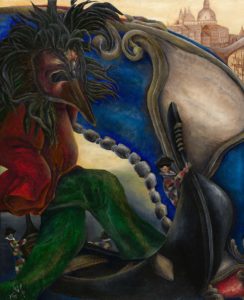 C.G. Jung defined living symbols as interface phenomena between consciousness and unconsciousness. Friedrich W. Doucet remarks that certain symbols are as old as language development. In this context Fred Poepping speaks of primal symbols. Poepping interprets these symbols in their complexity against the backdrop of developments in human history. He explains that symbols are based on spiritual archetypes.

Mythorealism takes up these archetypes and the coherences between consciousness and subconsciousness. In his understanding the existence of an individual person is determined by basic patterns, which appear repeatedly throughout life. Included in those repeated loops there are pictures in the form of inner landscapes, keys and symbols that are stored in our subconsciousness. Since those basic patterns can be recognized and as a consequence be shown as well, mythorealism describes more than just the usual normal state. It rather leads to a expansion of the obersever’s consciousness beyond the borders of simple reality.